More than 4,000 attendees turned out at historic Union Station for five days of networking, demos and sessions featuring 90+ speakers. The event’s Big Data Summit provided over a day’s worth of informative sessions on topics from analytics essentials to building smart cities and Internet of Things applications. Other sessions included fireside chats with thought leaders from Kansas City-based and national companies, keynotes from public figures as well as a number of panel discussions featuring experts from a variety of industries. 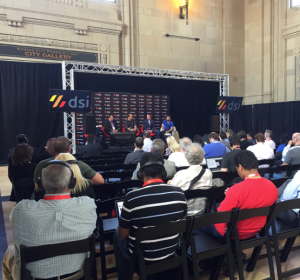 DSI’s own Amy Ellzey, Vice President of Talent & Culture, participated in one such panel, lending her expertise during the “Culture as a Competitive Advantage” session. The group discussed the role company culture plays in fostering innovation. To provide additional context throughout the rest of the panel, Amy defined company culture as “…your company’s personality; it’s the genetics that’s inside your company and your employee base.” At DSI, our culture is driven by innovation—and our office space reflects that. “We are an innovative company, we need to make sure that we have an environment where employees are motivated and challenged to be innovative,” Amy said. 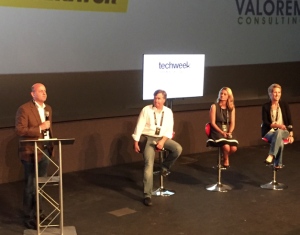 The highlight of the event was the LaunchKC grant competition for the organization’s first class of startups. Throughout Techweek, many of the grant applicants presented their ideas, including the 20 outstanding finalists representing eight states (including plenty of Kansas City-area representation), as well as Santiago, Chile. Each had a tremendous tech-focused business idea to share, but the following ten startups were awarded grants for their exceptional work: Blooom, HealthID, Integrated Roadways, KC Drone Company, Nodal Security, Pycno, SquareOffs, Vertisense and PopBookings. Grant winners will each receive $50,000 in grants as well as 12 months of free office space in downtown Kansas City.

The weeklong event ended with a 24-hour hackathon challenging developers to create an application to solve a real-world problem. Several groups of local developers competed for thousands of dollars in prizes. DSI’s own tech talent competed with three separate projects: an immersive virtual reality fitness training system, an iPad application that allows users to create their own storybook and an app that aims to expedite doctor visits with real-time data from wearable tech. We’re more than a little proud to report that the DSI teams swept every category.

After a full week of exploring tech topics with equally passionate government and business leaders as well as developers, entrepreneurs and analysts, we are proud to be a part of a city that is poised to move from being an emerging tech hub to becoming the center of the Silicon Prairie.